Our office is now open to the public again. Please use social distancing when coming in and please stay home if you are sick.

Downy Mildew of Wheat in NC

Find this article at:
go.ncsu.edu/readext?407030
— Written By Christina Cowger and last updated by Audrey Mercer

Several widely separated parts of North Carolina appear to be having outbreaks of downy mildew of wheat. This is a highly unusual problem in North Carolina. The current symptoms are severe stunting, excessive tillering, some leathery leaves, some yellowing.

Below is a representative photo taken by Rod Gurganus in Beaufort County. Attached are a photo of leaves taken by Mac Malloy (was this in Robeson Co., Mac?), and a publication from Louisiana, where the problem is a little more common. 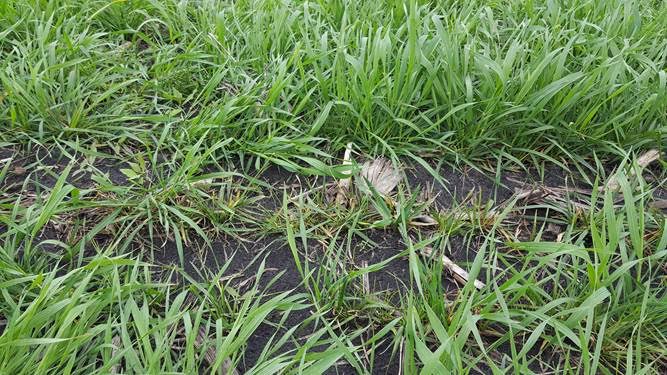 In the past week, these symptoms have been observed in Beaufort, Robeson, and Lenoir counties. At the Hugo research station, there is severe damage to the OVT, and there is significant damage in plots at the Cunningham station too. Some varieties are hit worse than others, so genetic susceptibility may be playing a role. Mac reported that in two adjacent fields, P26R41 was significantly more stunted and mottled looking than P26R10. He says two other growers in his area are having the same problem.

Downy mildew is caused by an organism (Sclerophthora macrospora) in the same class as the causal agent of potato late blight or sudden oak death. This is an oomycete, not a true fungus. Plant parts in standing water, especially leaf sheaths, are subject to infection. Spores are disseminated in moving water. Wheat infections are most frequent in flooded areas near ditches and in lowlands. The stunted and excessively tillered plants are unlikely to form heads or seed, and many die before jointing. After heading, diseased plants have twisted heads and leaves, giving the disease its name “crazy top.”  Downy mildew can occur on barley, rice, corn, oat, sorghum, and many grasses, in addition to wheat.

Standing water is a major reason for the problem. At this growth stage, nothing can be done for the current crop. Improving drainage in problem areas is a longer-range solution. It may be advisable to avoid replanting wheat soon in fields with severe damage; rotate with non-cereal crops. Control grassy weeds, as they may serve as host plants. Grain to be used for seed should be thoroughly cleaned by fanning to remove all fragments of disease tissue and lightweight kernels, as the disease may be seedborne. 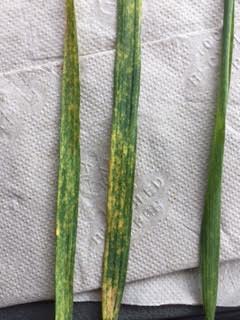