Find this article at:
go.ncsu.edu/readext?406943
— Written By Daniel Simpson 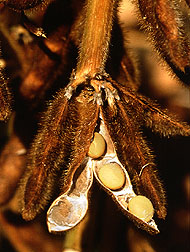 Mature soybeans- Most soybean varieties have the Agricultural Research Service in their pedigree. Agency scientists have released 66 varieties and 280 breeding lines between 1980 and August 1994.
Photo by Scott Bauer.

Managing early, or even very early, maturing soybean varieties is not too much different from managing mid-season or late maturing varieties, as long as you recognize that they generally quit growing earlier, and each stage of development happens earlier in the year. Perhaps most importantly, many of these earlier varieties will shatter much sooner after reaching physiological maturity, so they need to be harvested on time.

Please be aware that earlier maturity varieties will tend to quit growing before later maturities (IV before V, V before VI, etc.). This holds true for indeterminate varieties as well. Since they quit growing earlier, they don’t have as many days after planting to get big enough. Dr. Dunphy’s suggested planting window is to start when the corn is up and growing (not waiting on warm weather, but growing), until you can get those varieties 3-feet tall and lapping the middles. This might occur from about mid April to June 1 (May 15 may still be your mark). Generally, planting earlier may give you a few extra days of growth. However, planting when soil temperatures are in the low 50’s may not be advisable. Germination will be slow, leaving seedlings subject to greater risk (NC Climate Data Search). Delaying planting for a week or two for good germination/growing conditions should not have a significant affect on yield and could help reduce the need to replant (important if seed availability is low).

Earlier maturing varieties attacked by foliage feeding insects (which tend to show up before blooming) won’t have as much time to put on new leaves (NCSU Soybean Portal). Insects that tend to show up around blooming will probably show up earlier in the year, and beneficial insects and insect diseases may not be quite as numerous. These earlier maturing varieties will reach physiological maturity sooner in the year, which may put their harvest in conflict with corn or peanut harvest.

Unfortunately, many (but certainly not all) of these earlier maturing varieties won’t wait very long for a farmer to finish up his corn harvest, or for his neighbor to finish his harvest first. Some years, many of these earlier maturing varieties will have green stems when the beans are dry enough to harvest. About all you can do then is slow the combine down; there’s usually not enough green tissue left to take up enough Gramoxone or sodium chlorate to be an effective harvest aid.

Sorry! We haven't gotten there just yet.

This county has not yet activated their e-mail sign-up form. However, you can still subscribe to other Extension Topic sites.