Fall Armyworms on the March

Find this article at:
go.ncsu.edu/readext?819519
— Written By Daniel Simpson and last updated by Tamara Carawan 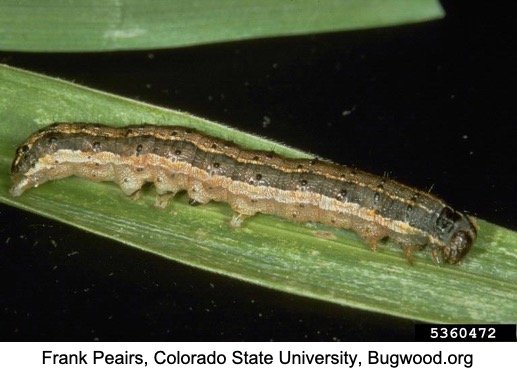 Over the past several weeks fall armyworms (Spodoptera frugiperda) have been on the march. These insects feed on turf and pasture in large “armies” creating increasing areas of brown grass as they feed. The damage they create can be severe for newly sodded or sprigged areas, and late feeding into fall can result in little time for recovery of turf before winter.

Fall armyworms are approximately 1-1½ inches long, depending on the growth stage, and can vary in color from a green to mottled brown, to almost black. Fall armyworms have wide black stripes running down each lateral side of the body. Sometimes, you will be able to distinguish four black dots on the dorsal (back) side of each segment of the abdomen and a light-colored, upside-down “Y” marking on the head capsule.

Fall armyworms have a very wide host range but generally prefer plants in the grass (Poaceae) family, low-growing herbaceous growth, and woody shrubs. Most grasses, including coastal bermudagrass, fescue, ryegrass, bluegrass, Johnsongrass, timothy, corn, sorghum, Sudangrass, and small grain crops, are subject to infestation. Hot, dry weather can intensify fall armyworm problems, especially when egg-laying adults lay their eggs in irrigated, green turf. At least some cultivars of all warm-season grasses are susceptible. Cool-season grasses like tall fescue are very favorable for fall armyworm growth and development too, and do not regenerate as readily as the stoloniferous grasses.

Fall armyworm adults migrate northward every year from southern overwintering areas. Adult armyworm moths are active at night and females lay eggs in masses of 50 to several hundred. These night-flying moths are attracted to lights and to lighter colored surfaces. Early August is a good time to start monitoring for egg masses on plants, objects, and buildings bordering turfgrass. As soon as the eggs hatch, caterpillars will immediately start feeding on nearby turf so early detection is essential to counteracting severe armyworm damage. Given the large number of insects present this year, additional damage might still be possible as a new generation starts to develop. You should continue to monitor for damage through September. 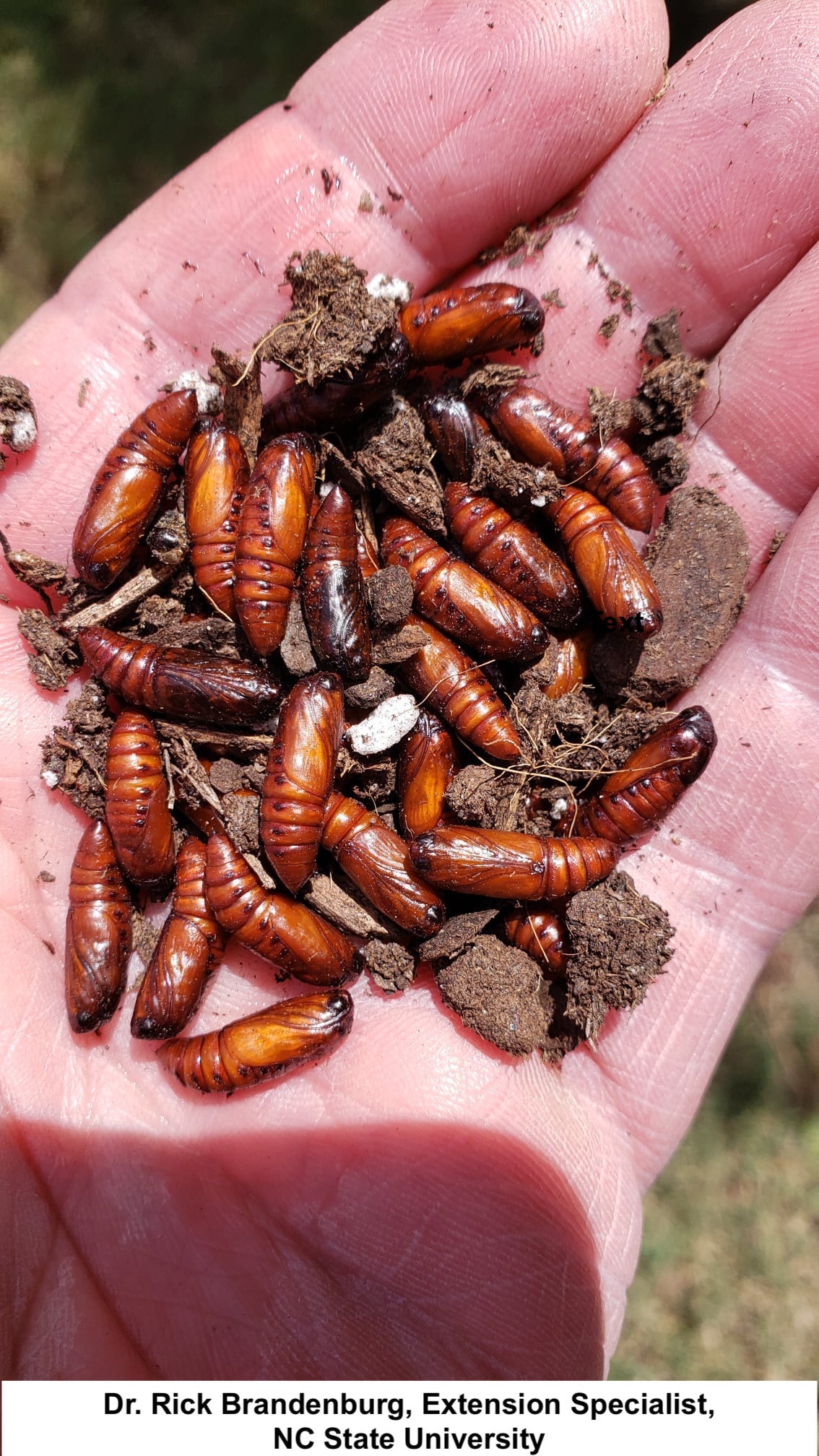 Damage from small larvae may at first look like skeletonizing, but as the worms grow, the entire leaf is consumed. Large numbers can consume all above-ground plant parts, and they are capable of killing or severely retarding the growth of grasses. This species may migrate in large numbers in search of new areas in which to feed. While there are several products that can be used to manage armyworm populations, small larvae are easier to control. Larvae are more active early and late in the day, spending the hotter hours where it is cooler down near the soil. They will feed for 2 to 3 weeks before pupating in the upper soil/thatch layer and will not be susceptible to insecticides at this point. Moths emerge 10-14 days later. The entire life cycle from egg to adult moth takes about 28 days in the warm weather of August and September. There are several overlapping generations.

If there is any doubt about whether worms are present, pour soapy water on the grass (1/2 oz. dishwashing soap/gallon water) to bring them up. Heavily infested turf will also have visible greenish-black fecal pellets on the soil surface. Other signs of armyworm infestations may include birds or even the paper wasps flying over yards as they feed on them. Because armyworms are most active late in the day and at night, apply the pesticide as late in the day as you can. Cutting the grass prior to application may improve control, but do not cut grass for 1 –3 days after application. Read and follow all label directions when using pesticides.

For more information on controlling these insects refer to the NC State Extension turf note, Fall Armyworms in Turf. You can also contact Daniel Simpson at 252-745-4121 or daniel_simpson@ncsu.edu.