Fall of the Pecans

Find this article at:
go.ncsu.edu/readext?744885
— Written By Daniel Simpson and last updated by Tamara Carawan 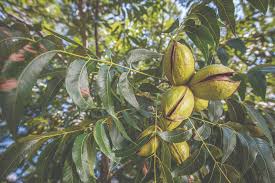 A common question over the past few weeks involves premature drop of pecans. Typically, mature pecans fall from trees when shucks open around November. Nuts falling from trees in September or early October (or earlier) are often green and still retain the shuck tightly attached to the nut.

So why do the nuts fall prematurely? There could be several reasons, including plant physiology (pollination, nutrient requirement, canopy load), environmental stresses (drought, excess water), diseases (scab, powdery mildew, etc.) and insect pests (pecan weevil, twig girdlers, etc.). One of the most common issues I see in the Extension office involves Pecan Scab disease. Scab is much more prevalent during wet years, and results in dark lesions that can form on leaves, twigs, and nuts. Lesions on shucks form sunken dark spots that can coalesce over time and result in premature nut drop. 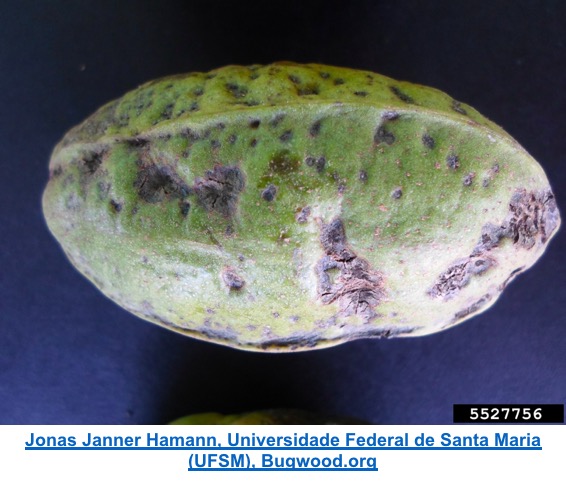 Variety resistance is important for scab control, as some pecan varieties are very susceptible to this disease. However, if you have large mature pecan trees, then choosing a different variety is obviously not possible. Fungicide applications are available to control scab, but the cost and ability of a homeowner to apply them make it impractical, which leaves us with one option, sanitation. By removing leaves, twigs, and pecans that have fallen during the winter, we can help eliminate possible infection sources for the coming year. Disease occurrence is still possible, but at least you can reduce that possibility. Good sunlight penetration and airflow into the tree canopy may also help reduce infection, but would require proper tree management (training & pruning, spacing, etc.) that most homeowners rarely provide. 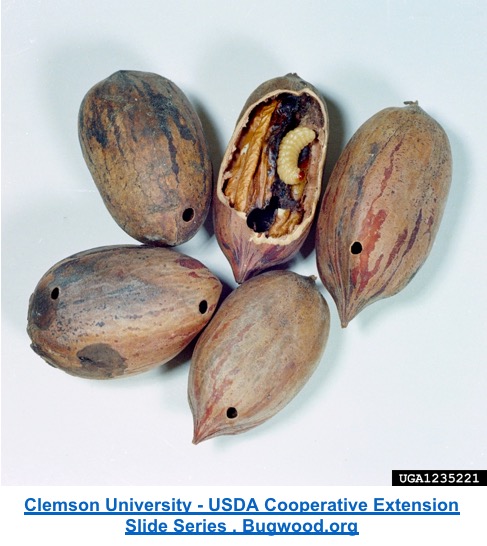 Some insect pests like pecan weevils can cause premature nut drop. Pecans that have fallen may contain several developing larvae that feed on the nut and exit the shell, leaving an unfilled nut that contains a hole. The larvae move into the soil where they eventually pupate and form into an adult. This process may take several years, but adult insects emerge annually from August through September, where they migrate to trees to feed and mate. Monitoring for these insects helps to determine when they are most active and when an insecticide application might provide some control. However, just like with fungicide applications, uniform control is limited since the most effective applications should be made to the entire tree. Soil applied insecticides might help reduce emerging adults, but the long period of emergence makes this difficult. Your best option as a homeowner is to pick up fallen nuts and remove them from the area before larvae have a chance to leave the nut and enter the soil.

Alternate bearing is often confused with premature nut drop. Pecans have a habit of producing a heavy bearing year followed by a light year of production. There are several factors that contribute to this phenomenon, which are related to conditions of growth and stress that result in less carbohydrate storage. Production the following year is then reduced as the tree has fewer reserves to draw from.