Find this article at:
go.ncsu.edu/readext?803027
— Written By Daniel Simpson and last updated by Tamara Carawan

(Taken from the article written by Paige Burns, N.C. Cooperative Extension of Richmond County at Managing Scale Insects in the Landscape) 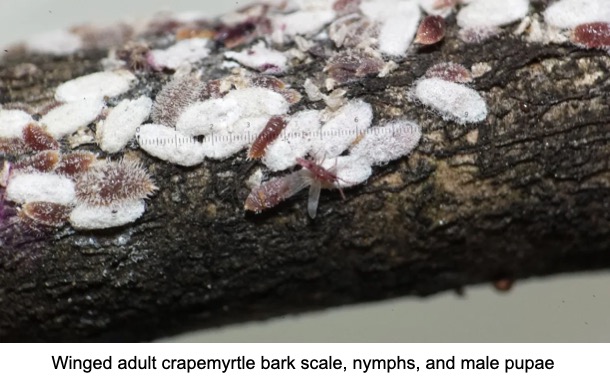 The most common insect pests in Pamlico County are scale insects. These insects often go unnoticed due to their small size and flat shape. When they are noticed, they are easily confused for diseases because of their color and their inability to move when mature.

Scale insects are a diverse group of pests that live on a wide range of plants, especially woody ornamentals. Camellias, hollies, maples, and euonymus are among the plants often troubled by this pest. Scales are divided into two groups, armored scale, and soft scale, with many species in each group. Armored scale insects are quite small, usually less than 1/8” in size depending on the species. They are called “armored” because the female is covered with a hard covering created by waxy secretions. This shell protects the soft-bodied insect underneath, as well as the eggs laid by the female. Once the eggs hatch, nymphs move out from under the protective cover of the mother. It is these new nymphs called crawlers, that are most vulnerable to pesticides. Once crawlers become adults, they produce the waxy secretion that protects them and attach themselves to plants, becoming immobile and feeding on plant juices. Armored scale varies in shape from circular to elongated, sometimes resembling an oyster shell. Males and females may look quite different in size and shape for the same species, with the female usually larger. 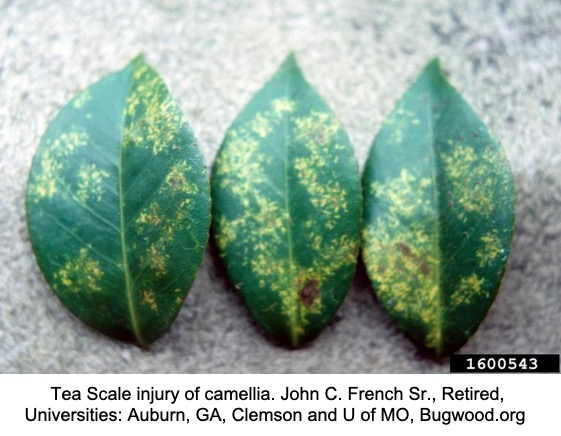 Because armored scale are small and inconspicuous, populations may build up unnoticed and cause serious damage to plants. Signs of armored scale infestation include leaf drop, yellowing leaves, and branch dieback. Drought and other stresses can make plants more vulnerable to scale. Common armored scale pests are Euonymus scale which, as the name suggests, is common on many species of Euonymus, and tea scale, often a pest on camellia. Gloomy scale is common on maple trees, where it is hard to see because it blends in with the grey bark.

Compared to armored scale, soft scale are relatively large and may look fluffy or like a ball of white wax, so in the adult form they are readily visible. Soft scale do not have a removable shell covering like the armored scale. In addition to feeding on plant juices, soft scale impact plant health by secreting honeydew, which is high in sugars. Honeydew causes a secondary problem, a fungal disease called sooty mold, which covers the bark and leaves with a black substance resembling soot. Sooty mold impacts plant health by blocking light from reaching the leaves, thereby decreasing photosynthesis. Tremendous populations can develop during a single growing season. Some of the more common species include Indian wax scale, oak lecanium scale and cottony maple leaf scale.

Control of all scale species is challenging because of the protection from pesticides provided by the wax and armored covering. Dormant/horticultural oils and insecticidal soap are the least toxic options for control. Oils are most successful during winter when heavy rates can be used to kill insects. Complete coverage is essential for optimal control. Other common insecticides are labeled for scale insect control including systemic insecticides; however, ensure that you have identified the scale insect and whether it is an armored scale or soft scale. Armored scale will not be killed by systemic insecticides containing the active ingredient imidacloprid.

For more information on scale insect management, you can review the NC State Extension insect note for armored scale and the note for soft scale. You can also contact Daniel Simpson at 252-745-4121 or daniel_simpson@ncsu.edu.