Find this article at:
go.ncsu.edu/readext?830198
— Written By Daniel Simpson and last updated by Tamara Carawan 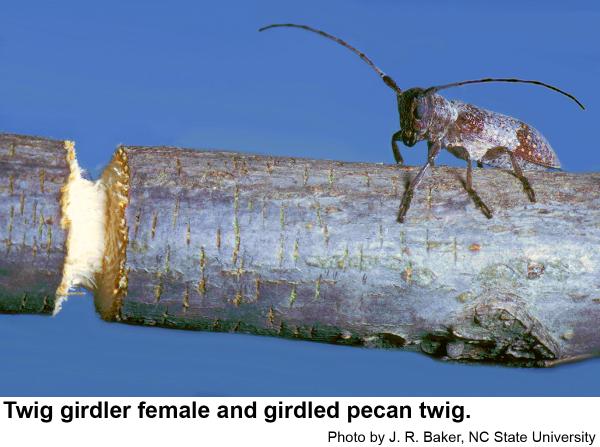 This past weekend, while preparing to mow my property, I had to clean up numerous small branches that had fallen from a large pecan tree. This exercise was a good reminder to take a closer look for the cause, as every branch I picked up exhibited signs of twig girdlers. These occasional pests typically cause only cosmetic damage to large pecans, but their presence can be a nuisance and hazard to lawn mowers. 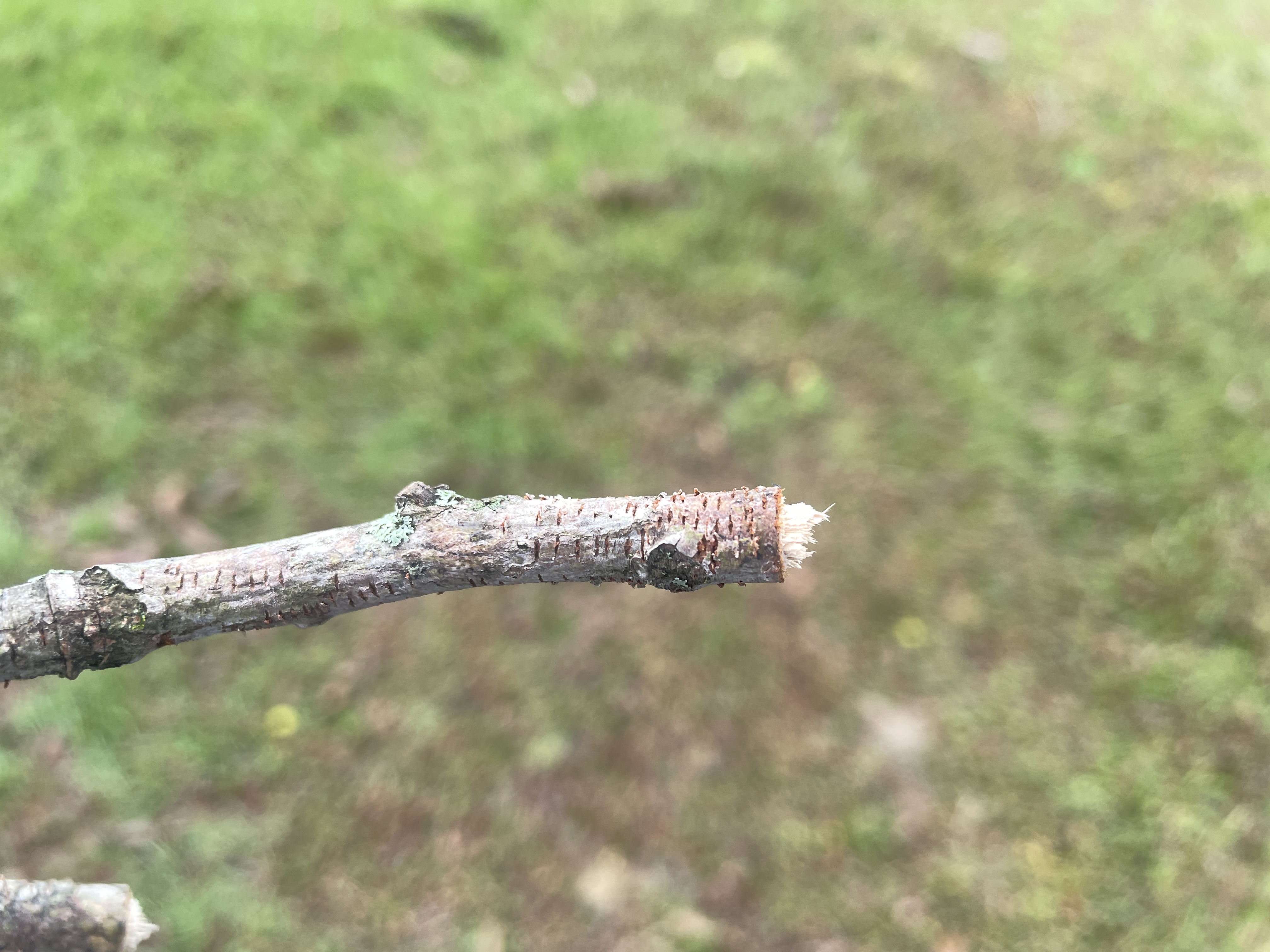 The twig girdler, Oncideres cingulata, is a mottled grayish brown longhorned beetle with long antennae and about an inch long. Twig girdlers are pests of pecan and hickory, and to a lesser extent, oaks and several other hardwood trees that have twigs with smooth bark such as dogwood, elm, hackberry, honeylocust, linden, persimmon, poplar, redbud, and flowering fruits.

Adults emerge in late August to early October and feed on tender bark and tips of twigs of host trees. They live 6 to 10 weeks. Female beetles then chew around and around twigs and small branches of host trees, inserting their eggs under the bark. Girdling extends through the bark and well into the wood in a complete circle around the stem that leaves only a thin column of center wood attached. Close inspection of the severed twigs reveals tiny egg niches near bud scars and many tiny grooves at the girdled end made in the bark by the female beetles.

Large trees usually sustain the most girdling, but young trees are sometimes heavily damaged. Since the twigs are girdled while the leaves are present, severed twigs retain dead leaves for some time. It is not uncommon to see the ground under infested trees littered with girdled twigs. After overwintering in these twigs, the larvae grow rapidly in the spring and tunnel toward the severed end of the twig by feeding only on the woody portion and leaving the bark intact. A few small circular holes are made in the bark to eject pellets of frass and excrement. Pupation occurs during August and September and lasts 12 to 14 days. The new adult chews a circular hole in the bark to emerge. There is one generation per year.

Girdling affects the beauty and aesthetic quality of ornamental plantings. This type of injury causes the development of many offshoots that adversely affect the symmetry of the tree. Repeated girdling of terminals causes forks, crooks, and other stem deformities in young timber plantations, as well as in natural reproduction. With pecans, the fruiting twigs of heavily infested trees are often reduced, resulting in lower nut yields the following year or years. Pecan nurseries located close to heavily infested wooded lots occasionally suffer considerable loss from girdled seedlings. 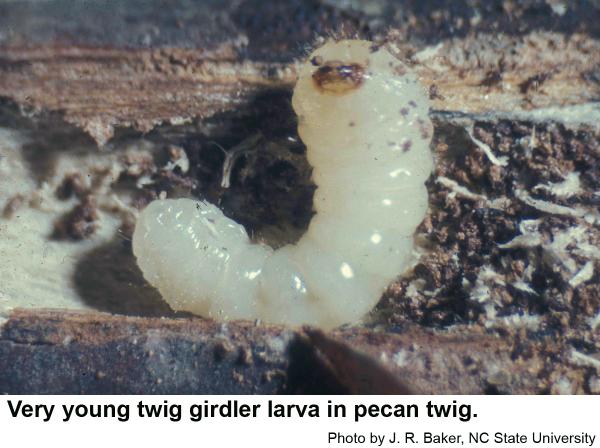 Insecticide applications are rarely justified or practical in landscapes. Insecticides may be necessary to prevent damage from heavy infestations in some hardwood tree nurseries. These may be applied once or twice in September and again in October as a protectant to reduce the majority of the twig girdlers. Natural controls are important in keeping twig girdler populations low. Desiccation of the eggs is apparently the greatest single mortality factor. The parasites, Eurytoma magdalidis, Iphiaulax agrili, and Horismenus sp., and a checkered flower beetle, Cymatodera undulata all help reduce girdler populations. In landscapes, orchards, and nurseries, the severed twigs on the ground, as well as those lodged in the trees, should be gathered and destroyed during the fall, winter, and spring while the eggs and grubs are still in the twigs. If nearby plantings have a history of serious damage, the same practice should be followed in nearby wooded lots containing oak and hickory. Twig destruction should greatly reduce populations in one or two seasons.

For more information about the identification and control of these insects contact Daniel Simpson at 252-745-4121 or daniel_simpson@ncsu.edu.