Find this article at:
go.ncsu.edu/readext?847217
— Written By Daniel Simpson and last updated by Tamara Carawan 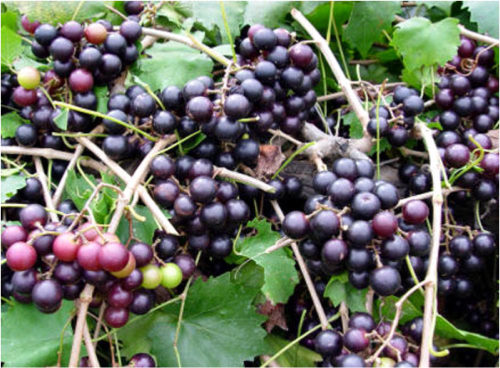 Pruning grape vines is a seasonal chore that helps to produce an abundant crop for many years. Vines left to grow unchecked will produce excessive vegetative growth that eventually becomes unproductive. Pruning provides a balance between fruiting wood and foliage that results in larger fruit of greater quality.

Grapes typically grown in Eastern NC are muscadine varieties, either bronze-green in color, sometimes referred to as Scuppernong, or dark purple varieties known for their sweetness. These grapes have their own distinct flavor, thick skins, and seeds. Popular muscadine varieties include ‘Carlos’, ‘Nesbit’, and ‘Noble’. Other grape varieties are classified as bunch grapes and include native Fox grapes and wine grapes. Bunch grape varieties are typically grown in Piedmont and Mountain regions, as Pierce’s disease, prevalent in the East, can shorten the lifespan of bunch grapes. If you wish to try growing bunch grapes in Pamlico County, you may have limited success. Be conservative in your planting and follow recommended management practices found in this Extension publication titled ‘Bunch Grapes in the Home Garden’.

As for muscadines, pruning and management is easier than bunch grapes. The best growing site for grapes is a sunny location with good internal drainage. Wetness is the greatest limiting factor in Pamlico County. If your soil has standing water after a rain, then either choose another site or consider creating a raised planting site.

Training of grapes is important, and the standard single wire trellis system is recommended for home growers. With this system, plants are planted between two poles, spaced 20’ apart, with a single wire stretched between each pole. This allows for the formation of two permanent fruiting arms that stretch outwardly towards your poles. These arms are maintained throughout the life of the planting, and from here all the fruiting wood is formed. All fruit is born on 1-year old wood, so pruning is used to reduce the excessive 1-year old wood that grew the previous season and leave enough wood to bear the new season crop.

Start your pruning efforts by identifying 1-year old wood, which typically has smooth bark, lighter color and contains buds. These buds are what you are trying to remove, but also what will produce new growth and fruit. The closer this new growth occurs to the permanent arm, the more productive it will be. Prune back vigorous growth towards these arms, leaving about 7-8 buds per shoot. This will help to create a balanced number of buds along the length of the vine that will maximize production.

February is a good time to prune muscadine vines, but any time after leaf fall and before buds begin growth in the spring is acceptable. “Bleeding” of water from pruning cuts will occur, but this is not a cause for concern. Remove old canes that you pruned and perform a general cleanup of the grape vine by raking fallen leaves and old fruit. If old diseased fruit remains around the vine, this can be a source of infection for the new season. Muscadines are tolerant of most pests and diseases and general sanitation from year to year is usually all that is needed to maintain healthy vines. Fertilize mature vines in March with about one pound of 10-10-10 scattered around the vine, but no closer than 21-inches from the vine. Another application in June may be needed if growth is slow. If vine growth appears vigorous or exceeds 3-4 feet of growth during the season, reduce your fertilizer rate. Remove weeds and turf from under vines to reduce competition and water when needed.

For more information on this subject please contact Daniel Simpson at 252-745-4121 or daniel_simpson@ncsu.edu.