Find this article at:
go.ncsu.edu/readext?877110
— Written By Daniel Simpson and last updated by Tamara Carawan 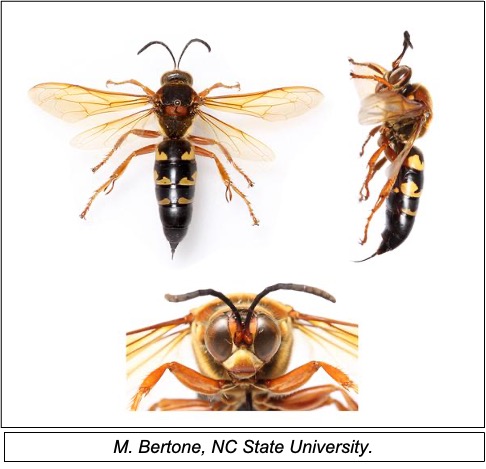 As we enter the summer months, homeowners may notice large black and yellow wasps called Cicada killers hovering over the front yard. News stories over the past couple of years involving non-native insects called Asian giant hornets or “murder hornets”, has led to confusion of these insects with other native insects like the Eastern cicada killer (Sphecius speciosus). However, Pamlico County residents have nothing to fear, as neither the murder hornet or cicada killer pose any threat. To help alleviate possible fears and misidentification, let’s briefly share a little bit of information about cicada killers in our landscapes.

Cicada killers (Sphecius speciosus) are solitary wasps that become active during the summer. Cicada killer wasps are generally considered beneficial as they feed on cicadas, which are known to be injurious to young trees. You may find cicada killers in your front yard as they emit loud buzzing noises, particularly around burrows to intimidate predators. Male wasps, which are smaller than females, will also defend their burrows by dive-bombing anything perceived as a threat. Male insects do not sting, but female wasps can sting but only rarely when mishandled.

The cicada killer is approximately 11/8 -2 inches long and is one of the largest wasp species in North America. It has a rust-colored head, thorax and wings with orange legs and a black and yellow striped abdomen. Their coloration is similar to that of yellowjackets or other wasps or hornets, and their large size can lead to misidentification with other insects like the invasive “murder hornet”. If you would like to learn more about the proper identification between these look a likes, then visit the NC State Extension note titled “A Visual Guide to Asian Giant Hornets and Similar Insects”.

Female cicada killer wasps will dig large burrows up to four feet deep in the soil, creating holes and mounds on the soil surface. Although cicada killers are solitary wasps, they often remain active in the same area following emergence. Cicada killer wasps emerge in mid to late summer with males dying soon after mating. Female wasps will remain active for approximately two months, during which time they will dig a burrow in well-drained, light-textured soil, preferably in full sunlight. At the end of each burrow, an individual female will create three to four cells in which she will later place her eggs. 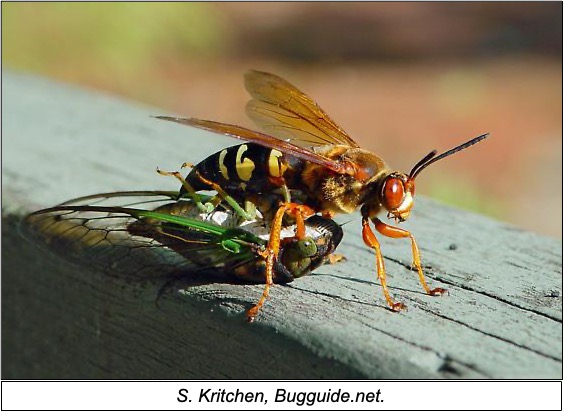 Once cells have been constructed, females leave to hunt cicadas by sight, often capturing them in flight. Once caught, the female will sting the cicada, paralyzing it and drag it back to the burrow. She will then lay one egg on her prey and place both in each cell of the burrow. One burrow may have as many as 20 cells. After two to three days, eggs hatch and the larvae feed on the paralyzed cicada.

Cicada killers are generally considered beneficial insects, since they feed on cicadas, and do not feed on plants. Therefore, it is usually not necessary to control cicada killer wasps unless their presence is a nuisance. Cultural practices can help prevent the establishment of cicada killer nests. This might include drenching an area with water to encourage wasps to abandon the sites (as wasps dislike wet soil), or supporting healthy turf growth to reduce areas of bare soil where females prefer to dig burrows. Applying insecticidal dust (carbaryl) to the entrance of each nest, will result in some control of cicada killer wasps, provided the burrow opening is not closed.

If you would like to learn more about cicada killer wasps and their management, then review this NC State Extension note. You may also contact Daniel Simpson at 252-745-4121 or daniel_simpson@ncsu.edu.